Brian Greene and Ruth Nathanson Greene received the President’s Award at the May 28 Joint Annual Meeting of the Jewish Community Federation of Richmond (JCFR) and the Richmond Jewish Federation held at the Weinstein JCC. 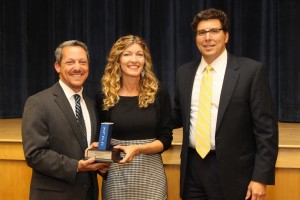 Richard Samet, President of JCFR, presented the Greenes with the service award for their leadership in the Jewish community. Brian recently completed four years as president of the Rudlin Torah Academy (RTA), Richmond’s Jewish day school for grades K-8.  Brian is the 2012 recipient of the William B. Thalhimer Sr. Young Leadership Award from the JCFR. Ruth is currently the president of Aleph Bet Preschool (ABP) and has overseen the formation and development of a new scholarship fund to assist ABP families. Ruth is also heavily involved in various committees and other volunteer work at RTA.