Ideas Are Just That: Part 3 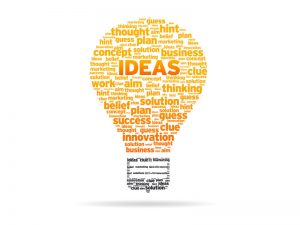 We’ve been sharing a series of blog posts and videos here and here about how an idea is just that: an idea, and how there are some basic, critical things a high-potential start-up technology company founder must do in order to make any idea worth having and building upon. As I said in my first post, the fact is, most ideas suck. So a founder needs to be sure this idea is worth making it the most important thing in her life for the next months or years.

My third suggestion for the immediate post-idea step is: Focus obsessively on creating a minimally viable product.

Don’t get caught up in the romance of the wonderfulness or inevitability of your idea, the greatness of your team, or the exuberant free feeling of having decided to jump in with both feet. The fact is, you haven’t yet accomplished the whole reason for doing this in the first place, which is selling something to people who want to buy what you have to sell. The excitement is going to wear off and then it’ll be time to get to work. If you don’t get to work immediately, you probably will have lost your opportunity.

It is all about speed.

Too many startups begin with an idea for a product that they think people want. When it isn’t resonating with customers, it is often because the founders never spoke to prospective customers and determined whether or not the product was interesting. When customers ultimately communicate, through their indifference, that they don’t care about the product, the startup fails.
The truly most important question you need to start asking yourself is the following. It’s the first thing you should ask yourself even before you swing your legs off the edge if the bed to get up on the first morning after to you come up with your great idea.

“Should this product be built?”

And then, soon thereafter, maybe before you brush your teeth, you need to ask “Can we build a sustainable business around your product?’
At this point it’s really only about two things: a first product that you know the world needs, and a plan for how first product can actually get customers. The team needs to be focused brutally on these things. Let the customers be your source of accountability.

The new company should be focused on quickly developing a minimally viable product and then learning as much as possible about its weaknesses and opportunities for improvement. Iteration upon iterations, pulling your hair out from anxiety that you’ll never get it right, near-all-nighters and lost weekends — all of that fun stuff. The point is to do all of this on the front end, quickly, and always being in dialogue with the customer, not stuck in an echo chamber of a founder team that may be overly enamored with the original concept.

When a founder focuses on figuring out the right thing to build—the thing customers want and will pay for—she need not spend months developing a prototype or waiting for a beta launch to change the company’s direction. Instead, she can adapt her plan incrementally, inch by inch, minute by minute, moving fast, boxing out the competition.

A couple of years ago I spent three days in the James Madison University’s Icehouse facility with about 24 entrepreneurs who had agreed to lock themselves in and spend that whole weekend developing companies based on pitches that they made on the first night. These people , for the most part, had never met each other. Groups coalesced around about eight ideas big and small. Through the weekend there was a compressed process of honing the original idea and creating a business plan and readying the product or service for the launch. I remember several of the teams were stumped by this question: Will customers want this? Only one of the groups spent the first night doing customer demand research – one group had thought to do this out of eight. That may be somewhat reflective about what real companies do when they go out into the real world. I hope not.

The founding team members need to relish being sponges for crucial information gleaned from the only people that matter: potential customers. This is never more true than at inception and in the earliest weeks and months.

Watch for our next post on “Ideas are just that.” Meanwhile, if you have any questions about startup steps or business law, just reach out to me or any of our Virginia business lawyers.